The Odessa Economic Index dropped sharply in April as COVID-19 tore through the economy in the first full month of the pandemic's impact on the metro area general economy and the oil and gas economy of the region. The OEI endured its largest single monthly decline in April, falling by 6.3 points to 255.1 down from 261.4 in March, and down 5.8% from the April 2019 index of 270.9.The previous record for a one-month decline was 4.3 points from July to August in the recession year of 2009.

The monthly table of economic indicators is rife with deep year-over-year negatives, with the exceptions of new housing construction permits and the average home sale price in the Odessa market. General spending, auto spending, hotel/motel revenue, building permit valuations, existing home sales (and the total dollar volume of housing sales), and employment are all down by double-digit percentage points compared to year-ago levels. The Odessa unemployment rate is nearly 7 times higher in April compared to April of a year ago.

Many of the numbers were already in decline before COVID came along, as was the Odessa Economic Index itself after peaking in June 2019. The rate of decline has clearly worsened, however, as big chunks of the economy were shut down beginning in March. The original culprit in the economic slowdown during the second half of 2019 was a declining regional oil and gas economy; the pandemic and the resulting shutdown began to crater an oil and gas economy already in decline, and activity levels began to fall at a record pace in April. 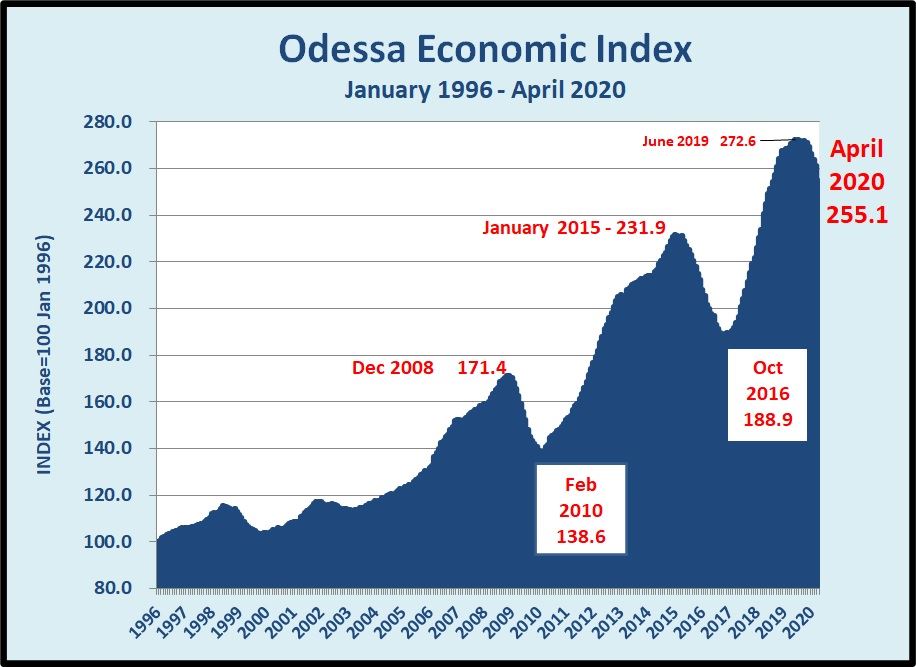 The Texas Permian Basin Petroleum Index dropped by another 13 points in April, and in fact the 13.3- point decline outpaced the 13.2-point decline in March to set the record for the largest monthly decline in the index.

The region lost 78 rigs from March to April (RRC districts 7C, 8, and 8A) and has continued its deep decline since then. Drilling permits fell off sharply as well, along with the loss of nearly 5,500 oil and gas jobs in Midland and Odessa, easily the largest single month of industry job loss on record. Notably, regional crude oil production (also the total from RRC districts 7C, 8, and 8A) declined in April after peaking in March, dropping by nearly 46,000 barrels per day.

That means that even as general oil and gas activity levels were falling throughout 2019, crude oil production was continuing to climb though at slower rates, reaching record levels in the Permian, in Texas, and in the U.S. And that production increase continued through the first quarter 2020. The declining regional oil and gas economy as measured by the Texas Permian Basin Petroleum Index was exacting its toll on the Odessa metro area general economy, but the downward momentum change beginning in April is readily apparent. 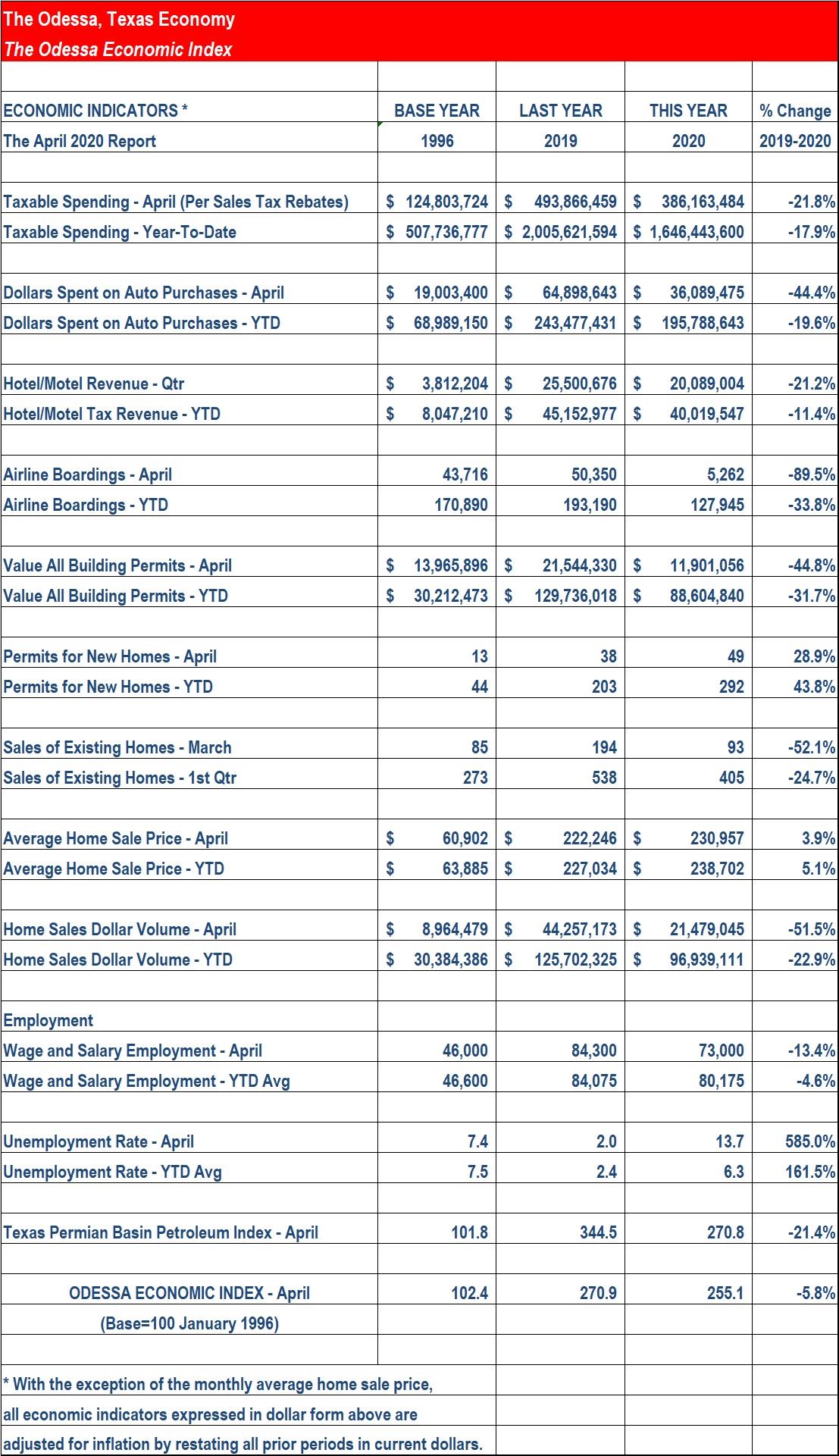 The employment numbers are the most starkly affected in April with a record number of jobs lost from one month to the next, and a record increase in the unemployment rate. The seasonally adjusted monthly employment estimates for the Odessa metro area indicate the loss of a staggering 9,600 jobs in April compared to March, representing about 12% of the jobs wiped out in just one month. The non-seasonally adjusted April payroll employment estimate is down by 13.4% compared to April 2019, which is the highest rate of year-over-year decline on record.

The Odessa unemployment rate began to tick upward at a faster rate in March and then spiked in April to a whopping (and record) 13.7%, compared to an extraordinarily low 2.0% in April of last year. The estimated number of unemployed residents of the Odessa metro area (Ector County) spiked from just under 3,000 in January and February to nearly 4,100 in March, and then to over 10,900 in April compared to under 1,800 in April 2019.

Auto spending numbers are timelier, and the April auto spending total is indeed based on motor vehicle sales tax collections during the month of April. Auto sales activity has been steadily declining since April 2019 and through March 2020 was down by about 10% year-over-year; however, sales dropped sharply in April posting a 44% decline in terms of inflation-adjusted spending on new and used motor vehicles. 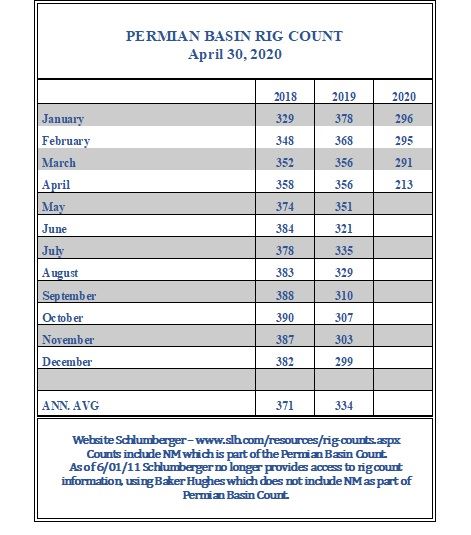 Passenger activity at Midland International Airport is among the most evident of local economic indicators as a bellwether for the shape of decline and the beginnings of reopening/recovery. Airport passenger boardings nearly always show a significant seasonal increase from February to March. This year, however, enplanements declined by about 15,000 in March, and then dropped to the lowest number in decades in April with only 5,262 for the month, a decline of 90% compared to April 2019.

Building permit activity has posted year-over-year declines in every month since January and that extends to April with the lowest monthly valuation since October 2017. In Odessa and other metro areas, construction appears to be somewhat less COVID-affected than other components of the local economy; still, the real (inflation-adjusted) total valuation of all permits issued thus far in 2020 is down by nearly 32% compared to the January-April 2019 total. Conversely, the number of new single-family residence construction permits remains in record territory at 292 permits issued through the first four months of the year. The April monthly total is not a record for the month of April but is up by nearly 29% compared to April 2019 (11 additional permits).

Even with the higher average sale price, the inflation-adjusted total dollar volume of residential real estate sales activity was down by over 51% in April and nearly 23% through the first four months of the year. 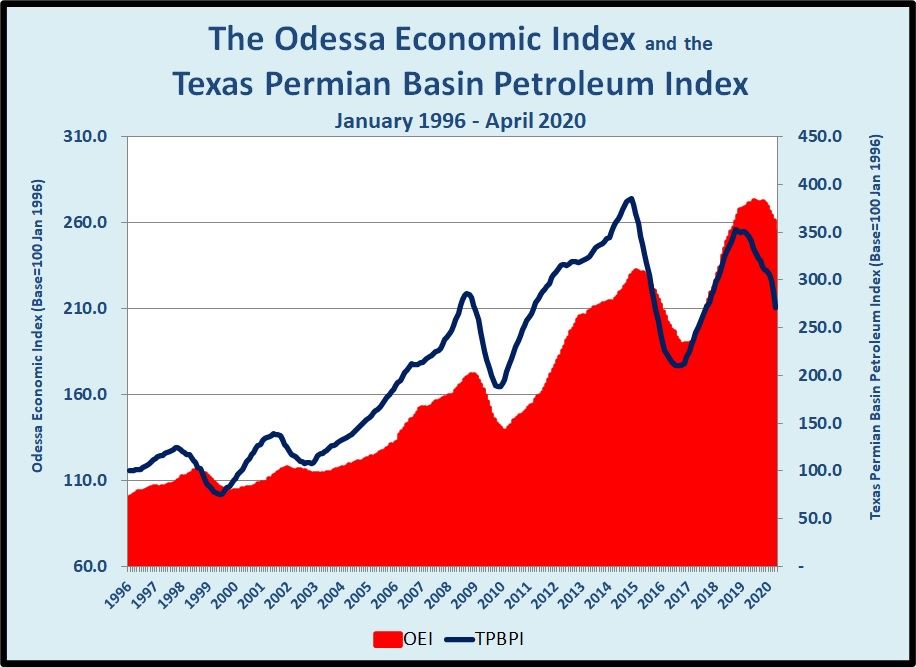 In some respects, April will be the worst month for COVID-19 impacts on the data - the price of crude oil, employment loss, and airport activity, for example. Depressed economic activity, both in terms of the Odessa general economy and the Permian Basin oil and gas economy will continue well into the future, however. Even if no more jobs are lost and the unemployment rate stops its climb, the prospects of the employment situation returning to pre-COVID levels is bleak in the near term and seems highly unlikely in 2020.

In some other metro areas, the spending indicators have shown signs of remarkable recovery. That may not happen so quickly in Odessa with the double-whammy of the COVID shutdown and sharply lower oil and gas activity which already had economic activity under pressure dating back to last year.Assessing general spending is a bit more of a muddled process as well because of the lag time in the reporting of local sales tax receipts. Spending declines in April will largely not be reflected until June, and the same thereafter. However, the Odessa Economic Index partially accounts for that phenomenon by including the most recently available month's data available to keep the analysis as timely as possible.